All articles tagged with "Hard"

Mistresses slap guy after he got turned on

These mistresses showed off their hot tits to this guy and he was turned on by them. But the mistresses pretended to be pissed at what he had done and they chose to punish him by slapping his face with their hands. The brutal faceslapping made him feel a lot of pain and also pee his pants. He was scared of what else they would do to him so he did not disobey them.

Madame Marissa wanted this slave to know that she would not tolerate him being late again. He was used to being late and it got to her nerves. She had to teach him never to do that again and so she used her faceslapping fetish to do so. The mistress made him kneel as she slapped the crap out of him and she did it while he was naked and humiliated.

Mistress Ronja and lady Ines had been asked to pay a debt but they did not feel like they were ready to pay it yet. The mistresses did not like how aggressive his guy was in trying to get them to pay. He was a debt collector and he needed them to pay for him to be paid. But the mistresses got pissed at what he was doing and they slapped the shit out of him while he was naked in the forest.

Princess Nicoletta caught her boyfriend going through her phone and she was angry. She did not like his insecurity and had to do something about it. She stripped him naked after asking him to explain what she had caught him doing but he could not. The princess faceslapped him brutally and he cried at the pain and promised never to go through her phone or any of her stuff again.

When this mistress learned that her slave had disobeyed her and done what she had specifically warned him not to do, she was furious and she had to punish him. And she made sure he felt all the pain she could master. She slapped him so hard that she blinded him momentarily despite the fact that he was a mask. She did it repeatedly but he could not help himself since he was tied up.

Princess Morgana felt like it was only her slaps which could work in the situation she was in with her slave. She facebusted him with her painful slaps and made the loser regret ever pissing her off. He had no idea that she was capable of what he had done and she not only slapped him, but the mistress also spat on his face as well as into his mouth.

Lady Hanna and lady Morgana found this guy jerking off in the street near their house and they did not like it. They did not bother calling the police. They beat his ass senseless. They brutally faceslapped him and made sure he was in the kind of pain he had never felt before. And from their slaps, they were sure he would never do it again especially since he was crying like a girl. 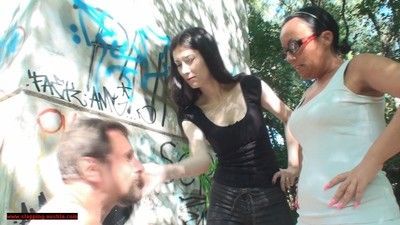 Mistress Manon did not like how entitled her slave had become. She had to change that about him and she did it cruelly using her slaps. She brutally faceslapped him and she even knelt on his chest to make it painful for him. He had no choice but to endure the pain. She warned him against his entitlement and told him he would have himself to blame for what she would do to him if he did not change.

Lady Emerald likes to punish people. But she likes to do it in a way that they do not know they are being punished. She loves to control people and she did it expertly on this loser. She forced the loser to kneel down and made him believe that she was testing his pain threshold so that they could have some kinky fun. But she was lying and she took advantage of his gullibility and had fun at his expense. 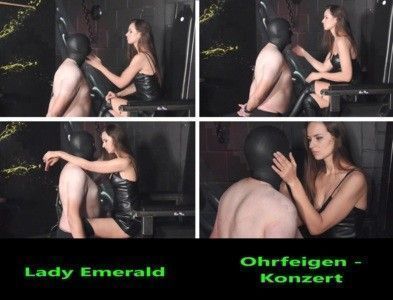