Lady Sarah loves to use her charm to slap guys. She loves to make them fall for her and then she gets them to want to prove themselves to her. Once they do that, she knows she has gotten what she wanted. Today she wanted to slap this guy so she got him to want to prove himself to her and in doing so she brutally faceslapped him for fun. 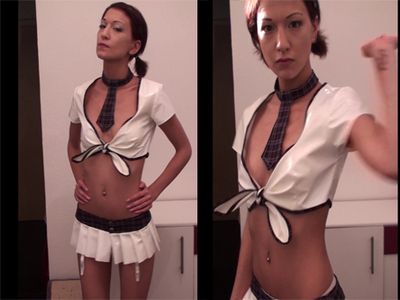 This mistress wanted to slap her slave without any problems. So she tied him up before she made him kneel down. After he had knelt down, she swung a slap his way that landed heavily on his face. He was momentarily blinded but she did not stop there. She slapped him again and again till she felt it was enough for her. She knew he would never piss her off again after that.

Mistress Sonny slaps slave till he pees his pants

Mistress Sonny was disappointed at her slave for not changing all the things she had asked him to change. She had pointed all the things she did not like and she told him to change them but he ignored her and went on doing them. She got pissed and to make sure he never did it again, she slapped him cruelly. She made him cry and even pee his pants as the slaps were extremely painful.

Mistresses slap and torture guy for messing with their friend

Mistress Maddy and mistress Bonny wanted to punish this guy for messing with their friend Renee. He had assaulted her and they were not going to turn a blind eye to what he had done. He was punished like never before. He was made to kneel down and after that they all took turns to rain heavy and hard slaps on his face. He was left with a red and swollen face.

Mistresses slap their accountant for stealing from them

Mistress BlackDiamoond and lady Celina had hired this guy to manage their accounts and cash office but he seemed to have been embezzling money from them. They were not pleased with him and they punished him cruelly. He was not just fired, but the mistresses slapped him cruelly. He was made to regret what he had done and he was forced to refund them the money he had stolen before he was fired.

Mistress Coco is a brutal girl. She likes to do nasty things to her slaves. Today she wanted this loser to smell her pussy as well as her farts from his kneeling position. She tied him with his hands to his back and she rendered him defenseless. She slapped him as hard as she could and she made sure his face had red marks on it and he was in a lot of pain.

Mistress Michelle and her friend lady Angie did not like how this guy treated other people. Their paths had never crossed so they had no reason to punish him. But today they did and the mistresses did not waste time punishing him. He was tied up and kicked. He was also slapped brutally and he was told about all the wrong things he did. The mistresses warned him against that behavior and promised to do worse if he did not change.

Mistress BlackDiamoond found out that their worker was stealing from their farm. They could not believe it given how good they had been to him. He was thankless and they did not like it. They chose to teach the ingrate a painful lesson so they stripped him naked and they slapped him all over. After they were done inflicting pain on him, they gave him some manual labor to keep him busy before they chased him away.

Mistresses teach guy a lesson for being a nuisance

Mistress BlackDiamoond and her neighbor did not like how much this guy was a nuisance to them. They had to put a stop to it and they did so cruelly. He was stripped naked before he was slapped and spat on. He was slapped till his face was red. The mistresses took turns to do it and when they were done slapping him, he was given some manual labor to teach him a lesson.