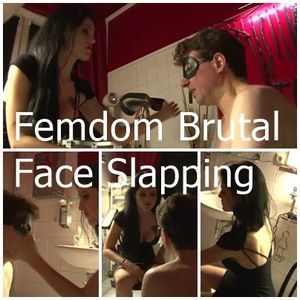 Mistress Jamie Kate wanted to pass a message to her slave but he was a joker and did not take her seriously. She was pissed and had to teach him a lesson. She forced him to kneel down before her and she spoke to him as she slapped him. That was when it dawned on him that mistress Jamie Kate was serious about what she was telling him to do.

Mistress Lea punishes guy for spreading rumors about her

Mistress Lea caught the guy who had spread rumors about her. She did not care that it was an old guy. She tied his hands to his back and used nipple clamps to make him scream in pain. The mistress then slapped the defenseless guy and made him groan and moan in pain. She sadistically enjoyed terrorizing the poor guy and making him apologize and promise never to do it again.