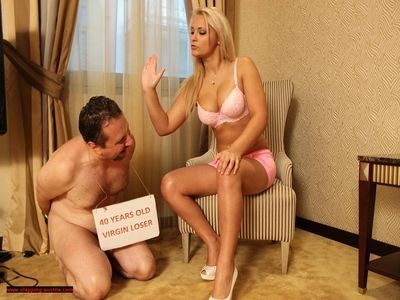 Mistress BlackDiamoond is a sexy mistress and she has a couple of her sexy friends over to have some fun with her loser slave. They have him tied up and his arms are restrained so he can not move or defend himself against his brutal mistress. She then starts slapping him in the face as hard as she can over and over again and then moves out of the way so her friends can take turns slapping him in the face as well!

This sexy blonde mistress is wearing black high heel boots and black pants and shirts as she stands in front of her loser slave. The slave is tied up to a pole with rope so he can not move or escape his brutal face slapping. She starts out lightly to warm up and then gets stronger and more brutal. By the time she is done her slaves face is bright red and he is begging for mercy.

Mistress Mara is a sexy brunette mistress wearing a bright red top with black pants and red high heels and she makes her slave start out by licking her shoes clean. He did it wrong so she starts out the punishment by trampling his bare hands with her sharp heels. Then he did it wrong again so she uses her open hand and slaps him violently in his face until he learns his lesson.

Mistress Alice, Mistress Emily and Mistress Eileen are three sexy mistresses who meet a new guy named Mite. He volunteers as their new slave and they decide to have some fun with him. First they make him take off his shirt and get down on his knees and then they take turns slapping him in the face as hard as they can. With each one of these mistresses hard face slaps the slaves face turn brighter and brighter shades of red.